EXPLORING THE BEAUTIFUL ZAGOROCHORIA IN GREECE

This time last year I took a trip to one of the most beautiful regions in Greece, the Zagorochoria. Long-time readers will probably remember this video which sums up how peaceful and unspoilt it is. Back then I promised to share more information and tips here on the blog, so here we are!

Let me start by saying that this part of Greece is an excellent choice for holidays during both summer and winter. The landscape is totally different to the islands and definitely more quiet that the most popular ones (hello, Mykonos and Santorini!). The Zagorochoria consist of 48 traditional picturesque villages built amphitheatrically in the Zagori region, nestled between the mountains Timfi, Pindos and Mitiskeli. The name “Zagori” is Slavic and means “beyond the mountains”. 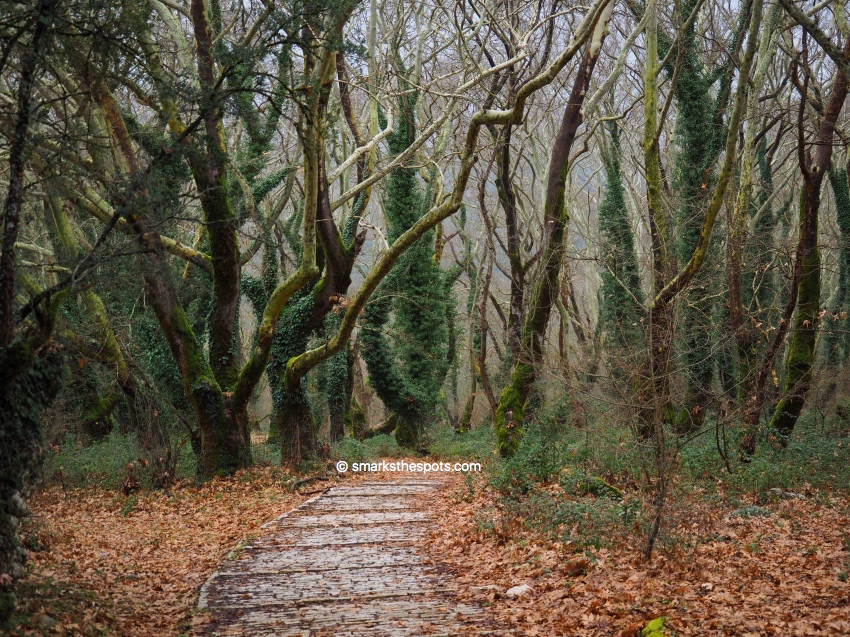 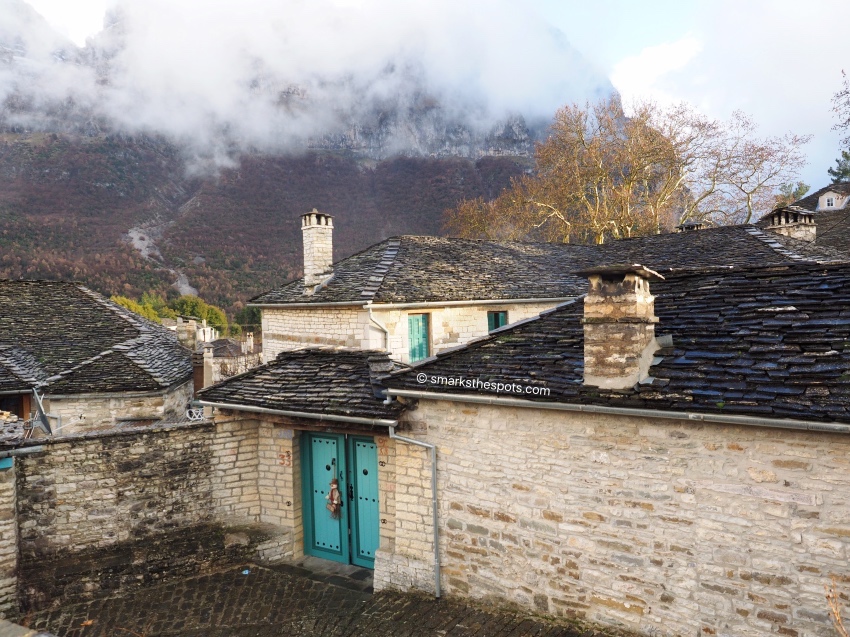 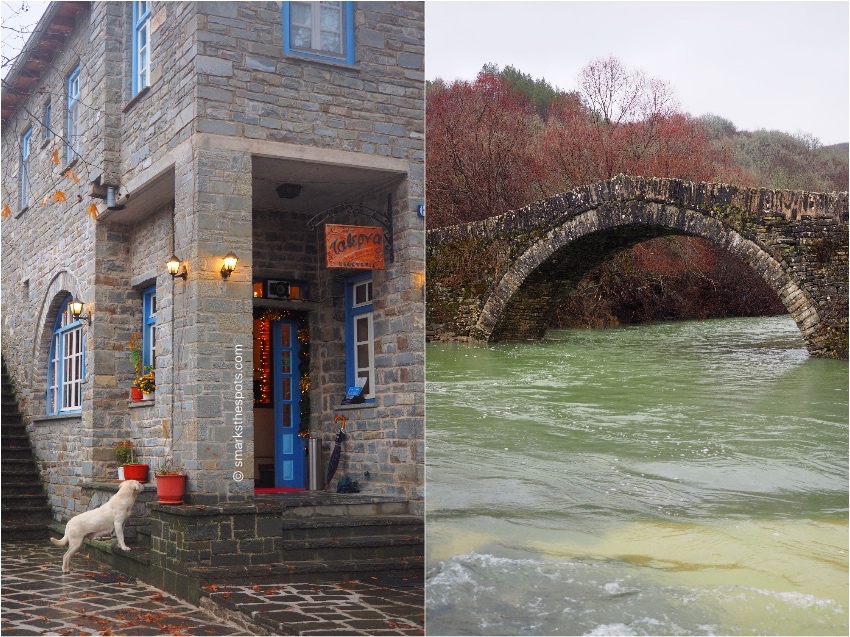 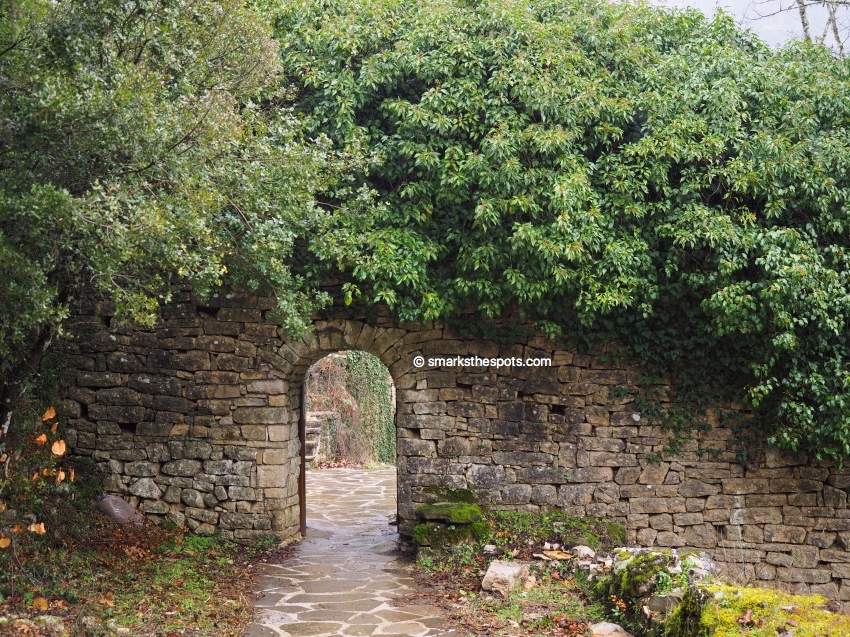 The Zagori region is divided into Western, Central and Eastern Zagori. Distances vary, so I think it makes sense that you explore the region by area. When planning a trip, consider how much time you have and pick the villages you absolutely want to see before booking your accommodation. Some villages are bigger and have more facilities than others, so plan in advance and be quick as all the good places are booked in advance. Luckily, the region hasn’t been spoiled by mass tourism, so don’t expect to find a lot of hotel complexes but rather traditional guesthouses and B&Bs.

My friends and I decided to start our trip from the Western Zagori area. After a short flight from Athens to Ioannina, we drove to Ano Pedina which was our basis. Since we wanted to explore the Zagorochoria as much possible rather than chill at the hotel, we were starting early in the morning, driving from one place to another, and then returned back to Ano Pedina after having dinner in the evening. Depending on the sights, the weather and how much we liked each village, we were staying either for an hour or more. I realise this is not everyone’s cup of tea, so if you’re into a more relaxed experience, you can always narrow down the villages you’ll visit. 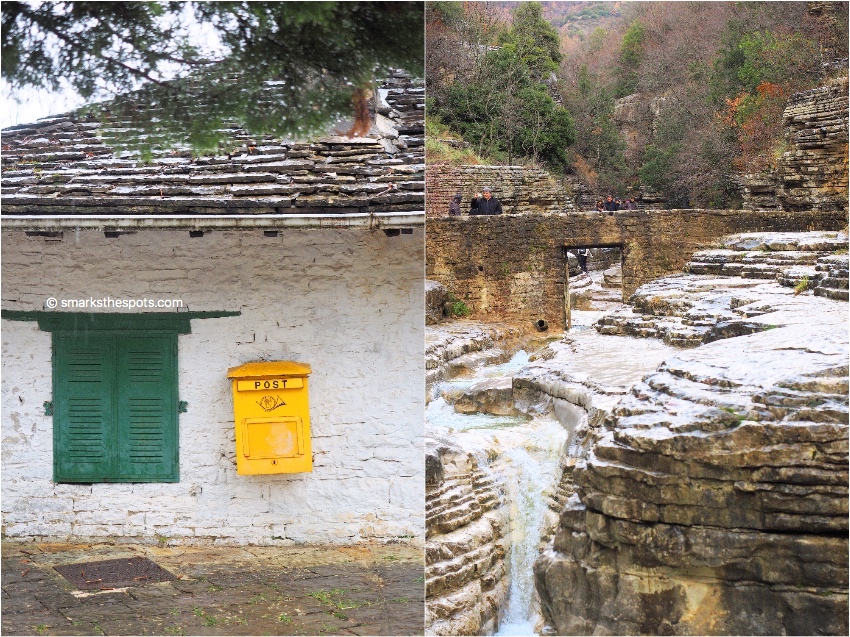 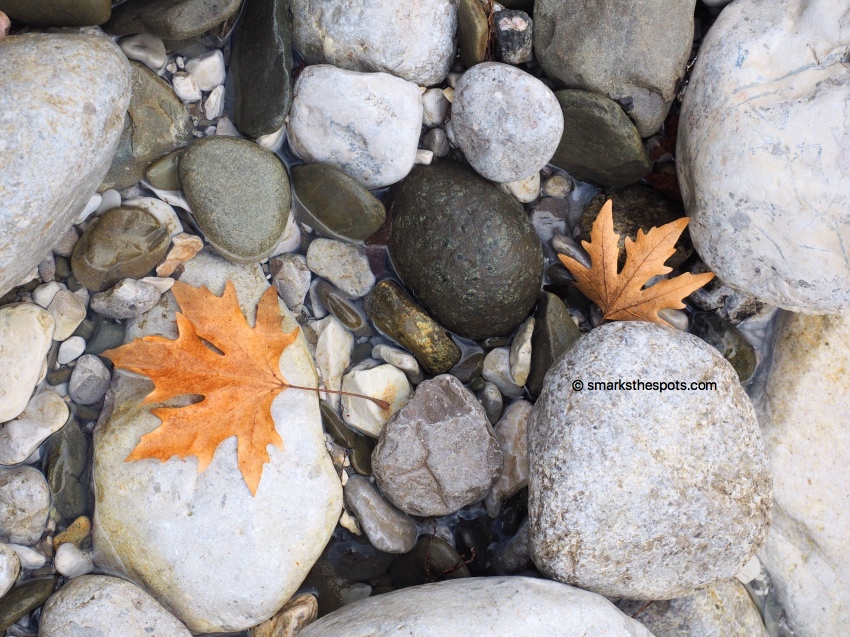 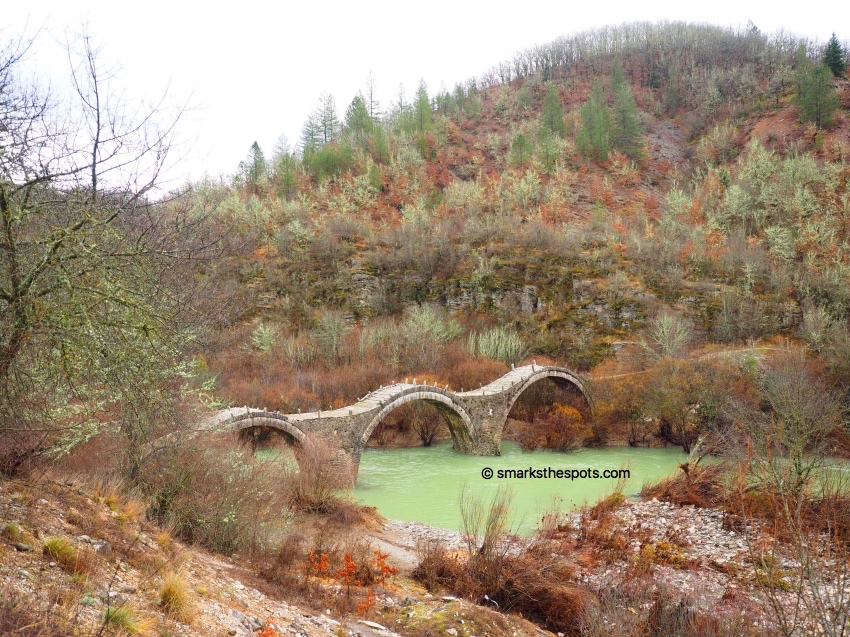 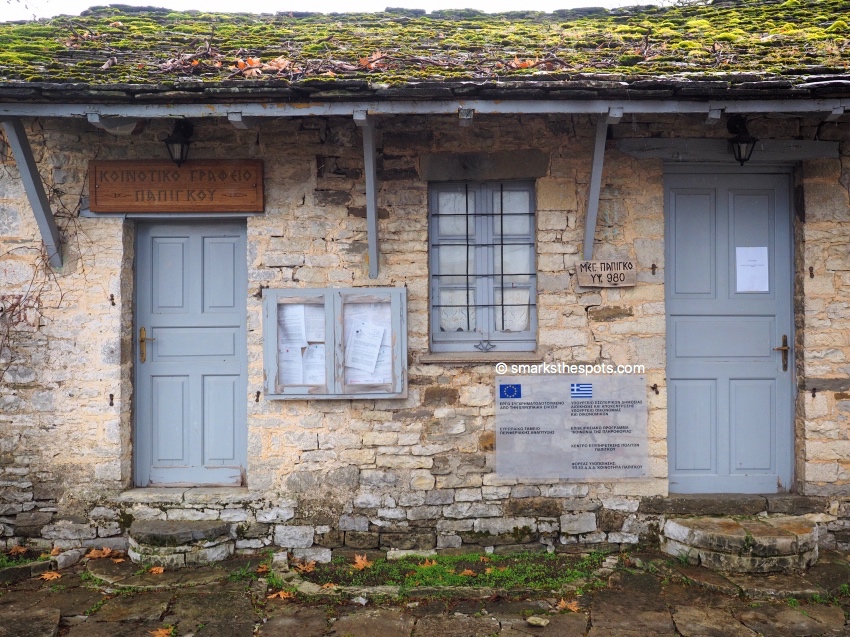 After a lot of research, we managed to find accommodation in Ano Pedina, a village which forms part of the Central Zagori. Our B&B was Amaryllis Boutique Guest House which was nice but nothing to write home about. It was actually not our first choice and I wouldn’t probably go back as it was way too expensive for its quality and the service was far less friendlier than we hoped for.

Ano Pedina was a great starting point for the routes we decided to follow. From there we visited Monodendri, a restored stone village with little cobbled streets, which hosts the Rizarios Centre of Handicrafts where one can admire traditional broidery weavings. Monodendri is located at the entrance of the Vikos Gorge which holds a record in the Guinness Book as the deepest gorge in the world in proportion to its width. We followed the rocky trail from the central square leading to the Monastery of St. Paraskevi which is built at the edge of a cliff. The road is beautiful – I still remember vividly the feeling of walking beside tall mountains half-covered in fog and have made sure to include it in my video – and so is the view over the gorge from the monastery. Vitsa was also lovely. Besides the stunning double-arch bridge of Misios, we also found a nice restaurant there, Kanela kai Garyfallo, which mainly serves dishes with mushroom from the Pindos mountain range, both farmed and wild.

We stopped next at Kapesovo, another beautiful village with long history. Here you’ll find the Paschalios School where the original copies of Rigas Feraios’ “Charta” are kept. Another spot you shouldn’t miss is the Vradeto Stairs that connect the villages Vradeto and Kapesovo. They were actually the only access to Vradeto village until 1973 but nowadays they will also lead you to another amazing viewpoint overlooking the Vikos Gorge. A bit further away, there’s Tsepelovo, one of my favourite villages of the whole trip. We walked around and I literally couldn’t put my camera down – I felt as if we were in a movie set! Last but not least, we visited the village of Kipoi which is surrounded by stone bridges, including the triple-arched Plakida-Kalogeriko and the Kokori’s ones. This is also where we found our absolute favourite restaurant (we all agreed on that!), Margarites. 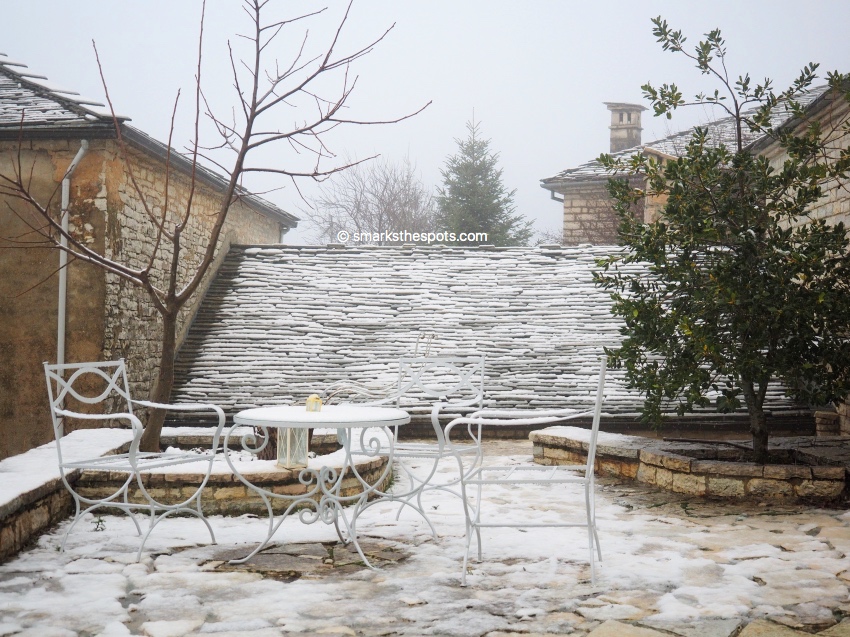 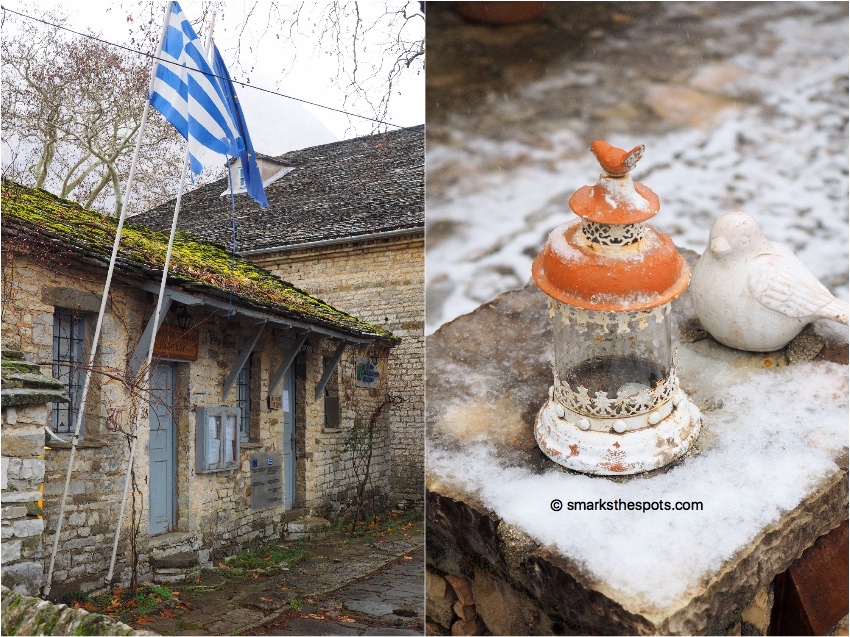 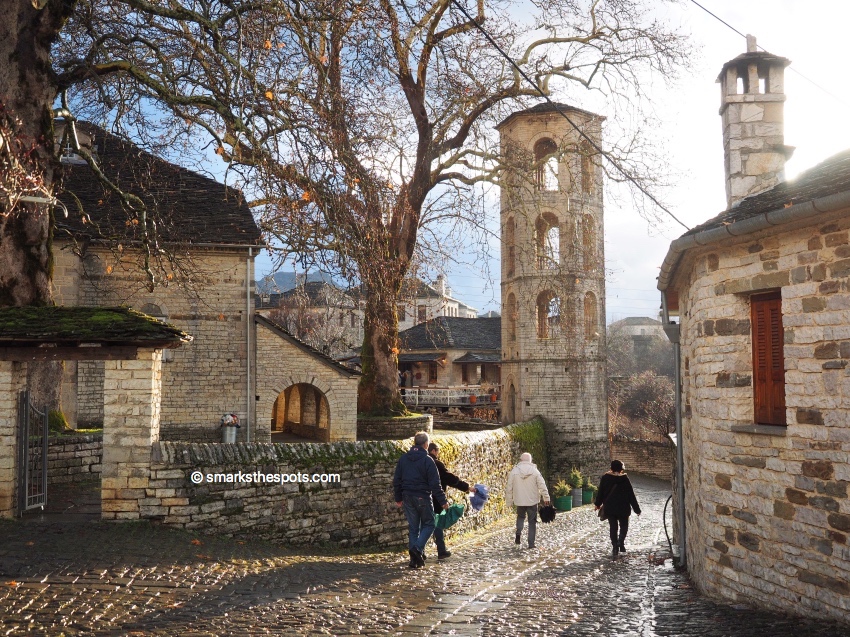 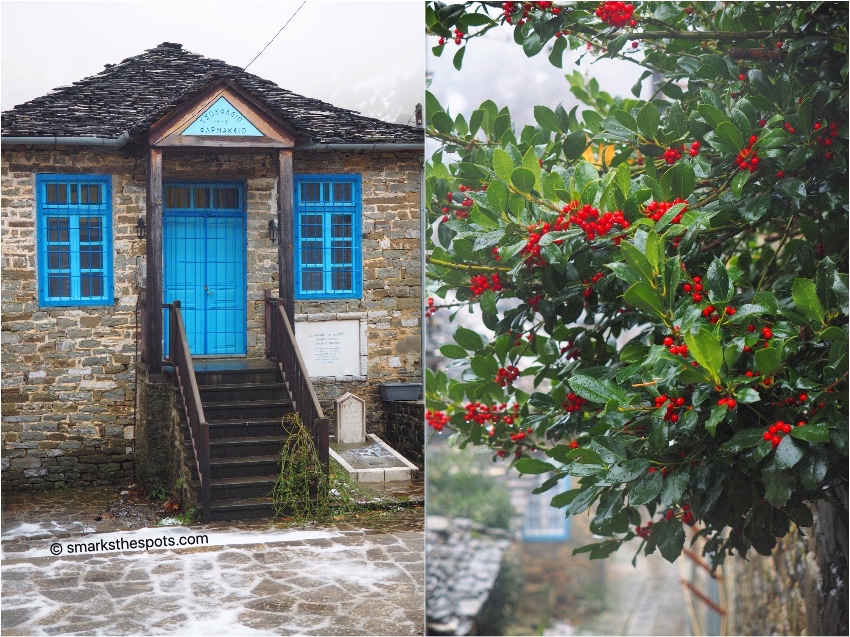 Our first stop from the Western Zagori villages was Aristi, a gorgeous traditional village mostly known for the Monastery of Panagia Spileotisas. Built in the 16th century near the banks of the Voidomatis river amongst a forest with perennial plane trees – the ones you actually see in the very first picture.

The next two villages we visited were Megalo Papigko and Mikro Papigko, probably the most popular amongst the Zagorochoria, which are located within the National Park of Vikos-Aoos. There’s a trail connecting the two villages that passes by Kolymbithres or Ovires, a small canyon cut by the river Rogovo. The flow of the water with the passage of time has carved the rocky sides of the canyon creating natural pools where you can actually swim in the summer. It is said that Ali Pasha of Ioannina used to do so back in the day. Megalo Papigko and Mikro Papigko are located at the base of the imposing Astrakas Peaks, so whenever we looked up we would see them looming above us.

Unfortunately, the weather didn’t allow us to hike up to the magical Drakolimni (which actually translates as “Dragon Lake”), one of the three alpine lakes of the Pindos mountain range. It is approximately a five hours’ hike from Mikro Papigo but oh, so worth it. This spot has gone straight to my bucket list! The lake has a rich blue colour that derives from the limestone foundation and according to the local legends,used to be inhabited by dragons. 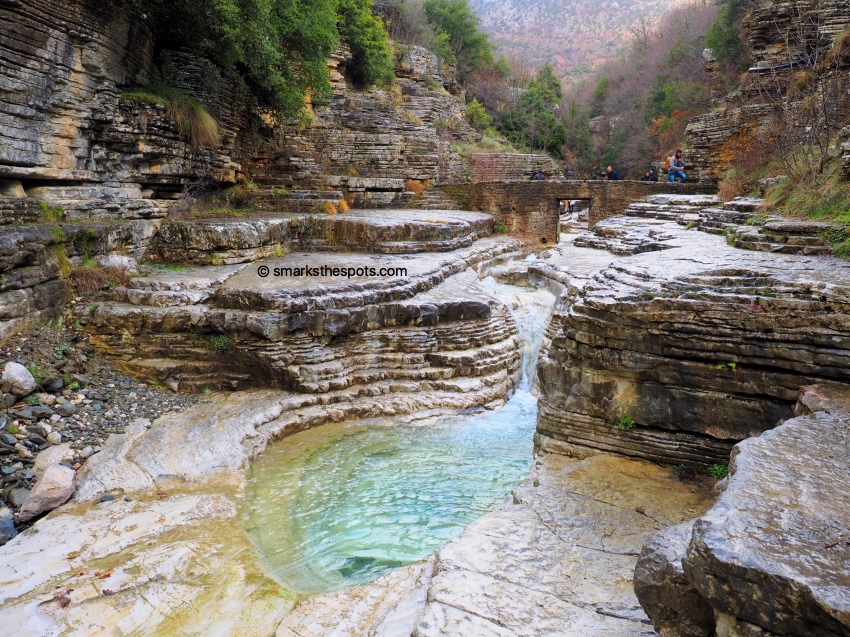 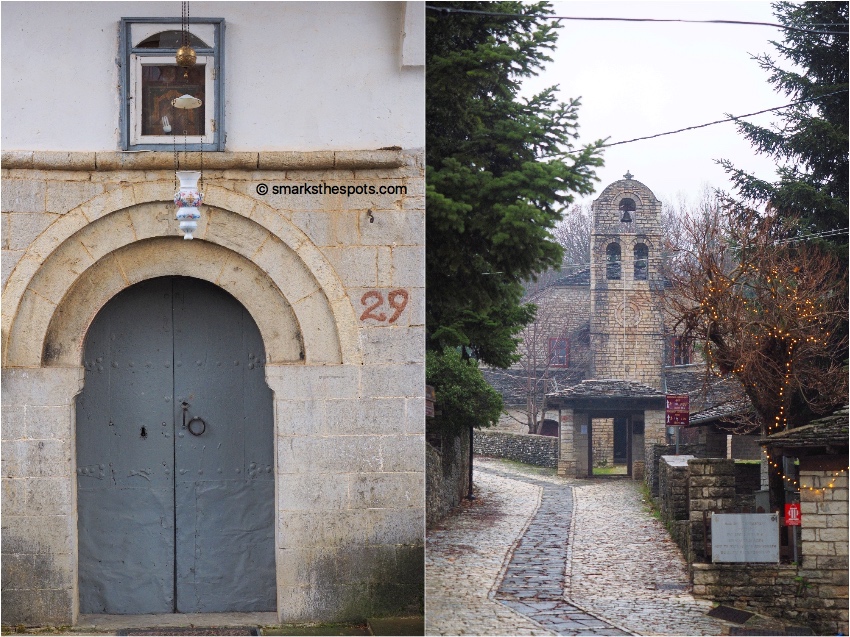 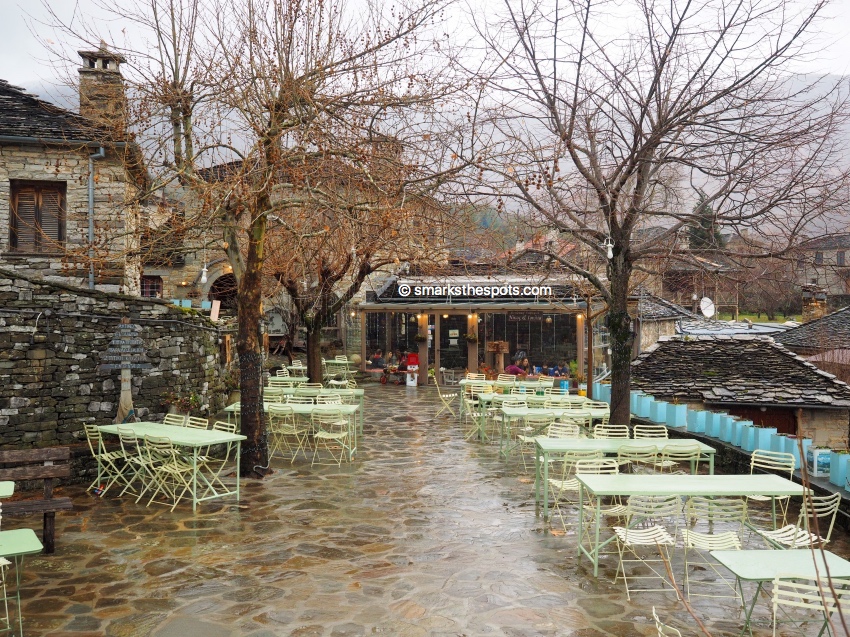 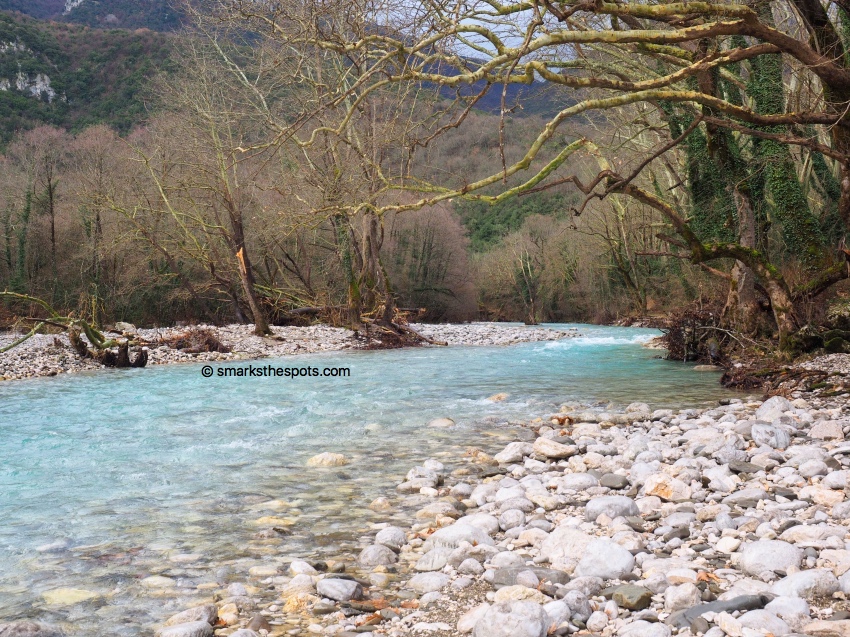 This part is far less touristically developed but equally impressive. Sadly, we didn’t have enough time to visit any of the villages, so now we have one more reason to return! We were particularly keen to visit Vovousa, which is known for being the most beautiful villages of Zagori, but I’ve also heard that Kastanona is lovely too. 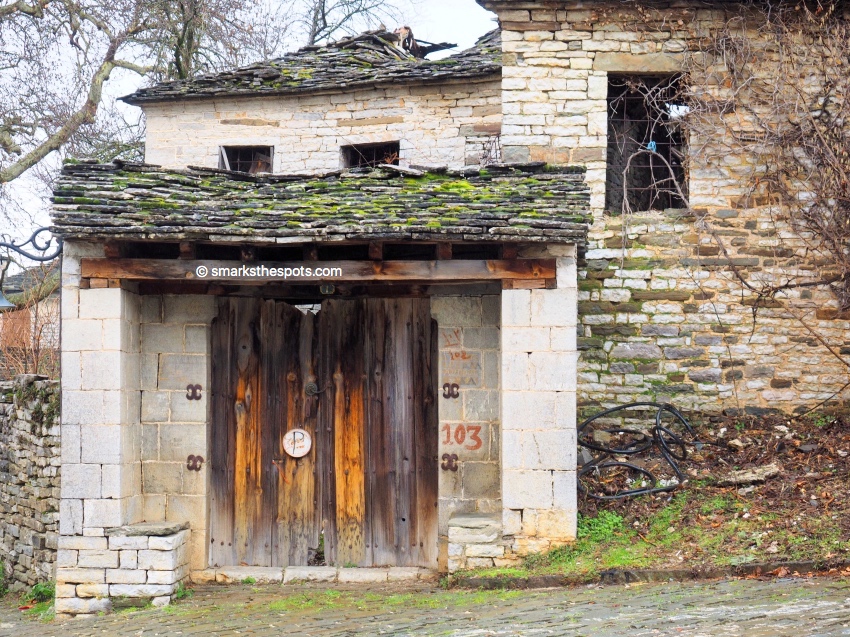 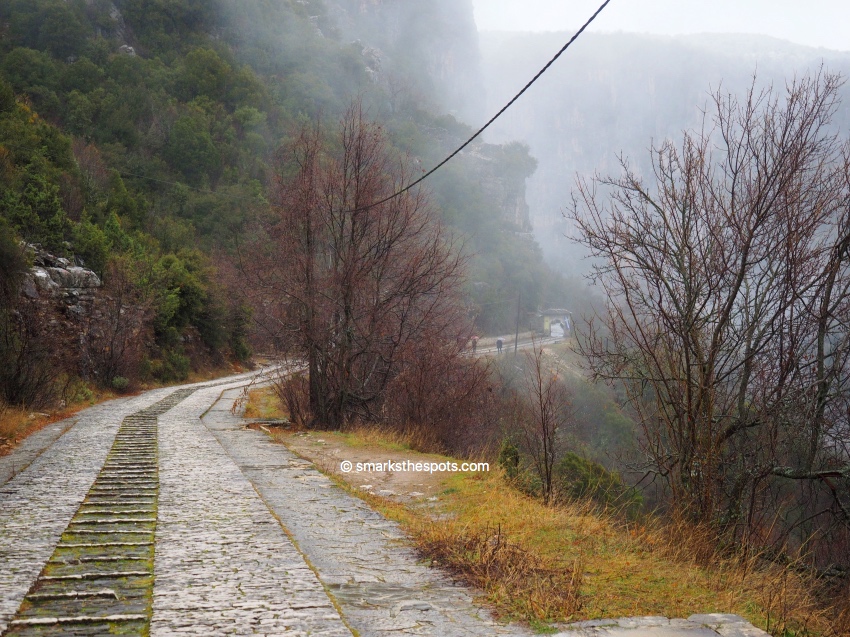 As I said in the beginning of the post, the Zagori region is beautiful throughout the seasons. We visited in the middle of winter, so it was very cold and rainy at times, so I can only imagine how magical the nature must be during spring. It will also perhaps be easier to enjoy all the activities available in Zagori, like rafting, hiking, horse riding, kayaking and mountain biking. If you’re planning to go in spring, check the dates of the Greek Orthodox Easter – it’s a very religious time which involves some great Greek traditions that are very special for visitors too.

A lot of local festivals with lots of food, Greek dances and live music are also organised in spring and around mid-August, so do your research before picking a date (a list can be found here). Epirus is known to have great tsipouro, handmade filo pies and its own, very special folk songs that are absolutely worth discovering. 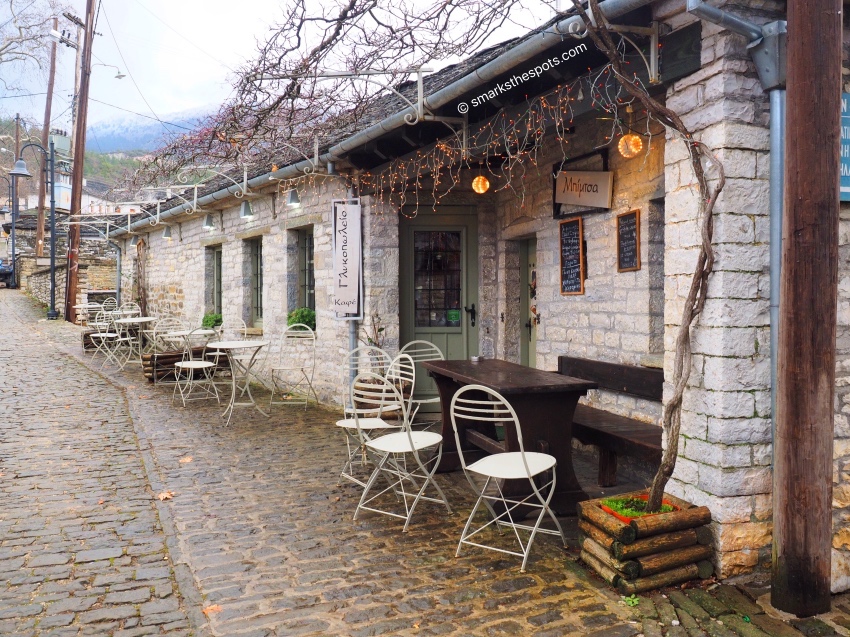 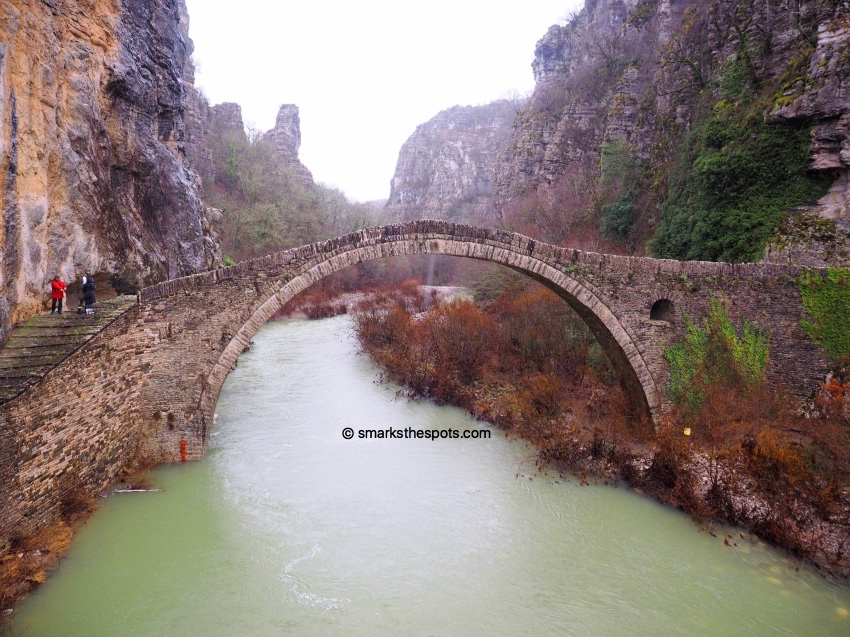