Portugal had been amongst the top European countries in my travel bucket list for quite some time. After last year’s amazing trip from Bordeaux to San Sebastian, my partner in crime and I decided to hit the road again and discover the area between Porto and Lisbon.

Coming up with our final itinerary was probably what took the longest, purely because there were so many places we wanted to see. One of the main things that became clear during our last road trip though was that we had to be realistic with our schedule and allow us the time to enjoy each destination rather than running like headless chickens from one place to another. After all we were on holidays!

So, here’s what we came up with after a lot of research. I’ll be sharing more photos and tips per place (there already a few on my Instagram) but first, let’s talk about the ones that made the cut as well as those that we decided to exclude and why. Looking back, I’m pretty happy with our selection and already looking forward to discovering the southern part of Portugal soon!

Our mini adventure began in Porto, the second largest city in Portugal. Starting from here rather than Lisbon seemed like a good idea as flights from London were cheaper and we could use the first couple of days to decompress and get into the holiday mood before picking up our rental.

Named as ”the city to visit” by Forbes last year, Porto was somewhat different from what I imagined but in the best way. A bit crowded (although not unexpectedly so – I mean this is what you get pretty much everywhere during August in Europe) but not too touristy, welcoming, easy to explore on foot and full of charm. We spent two days there but I could have easily stayed another one to explore a bit more a few areas around the centre, like Foz do Douro, Matosinhos and Afurada. 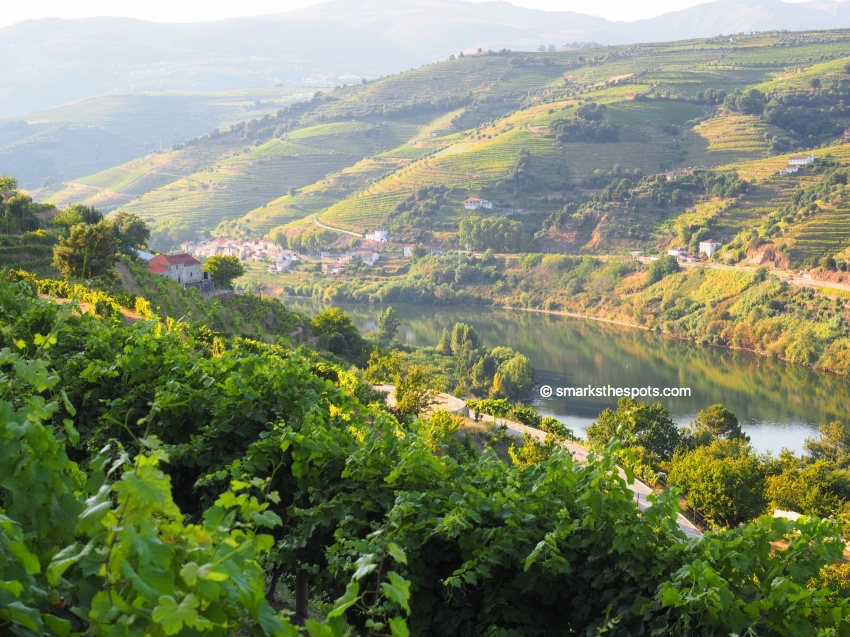 Both my partner in crime and I are wine enthusiasts, so we didn’t have to think twice before including the Douro Valley in our itinerary. One of the most ancient wine regions in the world and a UNESCO World Heritage Site, it’s unbelievably beautiful and the drive along the rolling hills and vineyards is one of the best memories of our trip. Although we were initially considering taking a boat cruise, we finally decided to arrange a wine tasting at one of the best estates in the region and book ourselves a nice hotel overlooking the river where we could sit back and take it all in. 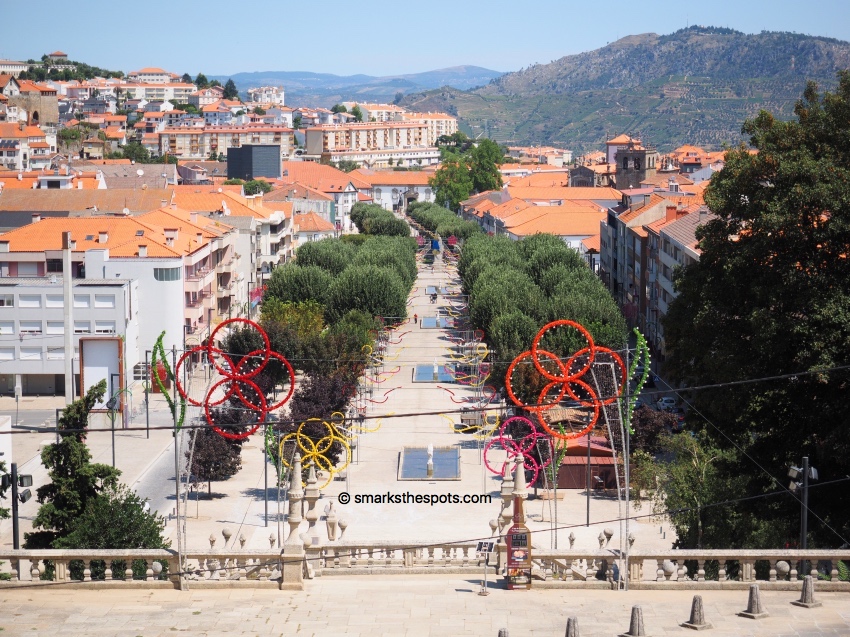 Before waving goodbye to the beautiful Douro Valley and reaching our next stop, we drove to the town of Lamego because we were both dying to see the Sanctuary of Nossa Senhora dos Remédios. Perched on the Monte de Santo Estêvão, the church is stunning. We didn’t get to climb all its 686 steps but we did get to the top to admire up close its tile panels and surrounding gardens. Every level was hiding a surprise and it all felt so fairytale-like – well worth a visit if you find yourselves in the area!

Coimbra charmed us with its preserved medieval old town and historic University. Some of the highlights of our stay here include encountering students in the academic gowns that inspired the Harry Potter cloaks, strolling along the Mondego river and visiting the Royal Palace, including the Joanina Library, one of the most impressive libraries I have ever been to.

When planning our trip, we thought about passing by Aveiro before reaching Coimbra. Aveiro is marketed as the Venice of Portugal but having been to Venice itself, Bruges and Giethoorn, we decided to dedicate a bit more time in Coimbra instead. I was also tempted to visit the São Jacinto Dunes Natural Reserve but since we saw the Dune du Pilat last year, I figured we could also skip it.

Last year we swam for the first time in the Atlantic Ocean while in France, so we felt that our trip to Portugal wouldn’t be complete without visiting at least one of its famous beaches. The closest ones to our route were Figueira da Foz, Peniche and Nazaré. We ended up going for the latter as it was the most convenient out of the three. The surrounding area and the beach itself were far too crowded and touristy for my taste, the water was freezing cold but the experience of taking a dip in the ocean was exciting. Totally different from the waters of the Aegean Sea that I love but still, something to try at least once. The views from the Miradouro do Suberco were amazing and we also had a fantastic meal at Pangeia Restaurante.

Before returning our car for the last leg of our trip in Lisbon, we spent a day in Sintra. It’s also possible to take the train there from Lisbon but having read that we had to arrive early in the morning to avoid the crowds, we thought it would be more convenient to go by car. And it was, although in the end we didn’t manage to avoid the long queues and traffic chaos, partially due to August being the peak season and because the current planning of circulation around Sintra is a mess. This isn’t to say that we didn’t enjoy our visit though. Another UNESCO World Heritage Site, Sintra is where Portuguese royals used to spend their summers, hence the various palaces scattered across the hills of the Serra de Sintra. With a bit of extra effort, we managed to see exactly what we wanted and then headed to Cascais for some well-deserved rest and relaxation. Despite being so close to Lisbon, Cascais felt like a world away. I loved its relaxing vibe, elegant charm and palm-fringed mosaic sidewalks. We spent half a day there which was enough for us but depending on your schedule, you could easily stay for longer and go swimming, do some sightseeing or just relax. This is the finest resort town of the Lisbon region, so you can’t go wrong.

Our plan was to also visit Estoril and Óbidos but only if we felt we had enough time to see them properly. In the end, we skipped both – Estoril seemed to us very similar to Cascais where we went anyway and since Óbidos would be swamped with visitors this time of the year, we thought it would take away from the whole experience. 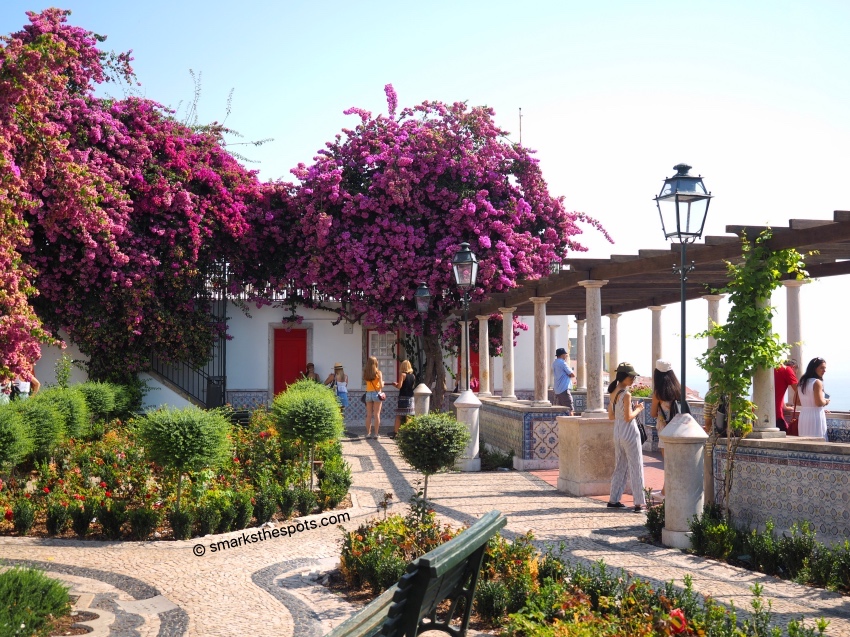 Last but definitely not least, Lisbon. I had a feeling I would love it here but didn’t expect to fall head over heels! To be fair, I’m not the biggest fan of uphill streets (especially when you have to walk all the way up in the middle of a hot summer day!) but everything else is right up my alley: seafood, the most amazing pastéis de nata, the ocean breeze, colorful tile patterns everywhere, the iconic trams and elevators, panoramic views from the miradouros, cute little quiosques to enjoy a drink… I could go on and on about the things I like about Lisbon!

Overall, I absolutely loved my first time in Portugal and cannot wait for my next road trip (destination unknown yet but there are many candidates!). Have you been to any of those cities? I’d love to hear how you liked them and whether you have any exciting travel plans coming up!