Isn’t it true that certain recipes remind us of specific moments in our life and are linked to memories? Today I wanted to share such a recipe that takes me back to the beautiful island of Milos in Greece where I first had the chance to try ladenia (remember this post?). Ever since it has become a staple in our household, especially during this time of the year when the juicy, ripe tomatoes are at their best. 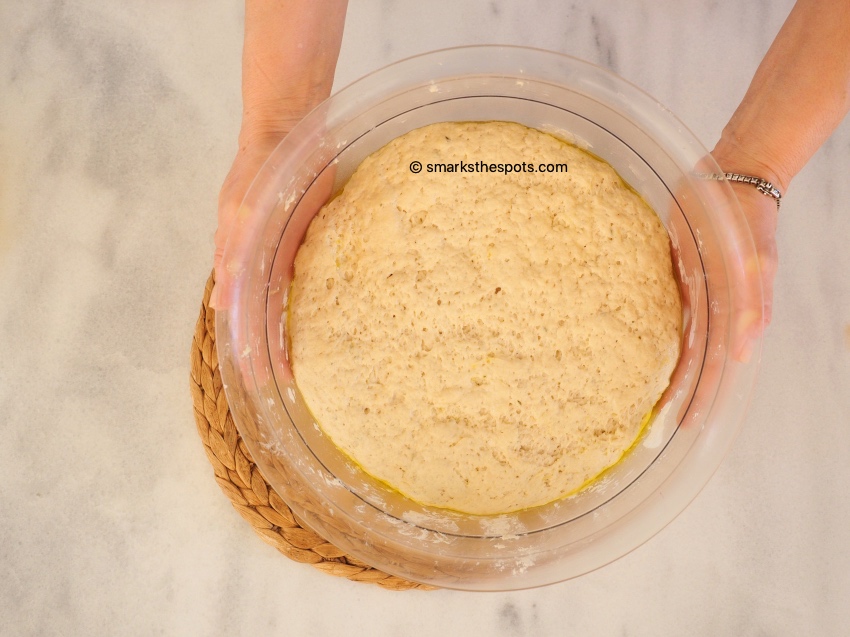 Ladenia, roughly translated to olive bread, hails from the island of Kimolos in the Cyclades and is best described as the Greek version of the Italian pizza. It’s basically a dough similar to foccacia with a generous amount of Greek extra virgin olive oil and topped with tomatoes, sliced onions and Greek oregano. It’s lighter and much healthier than the traditional pizza and a great alternative for vegans and vegetarians. This is the kind of food Greeks would have as a snack or pack to bring to the beach along with some fresh fruit. 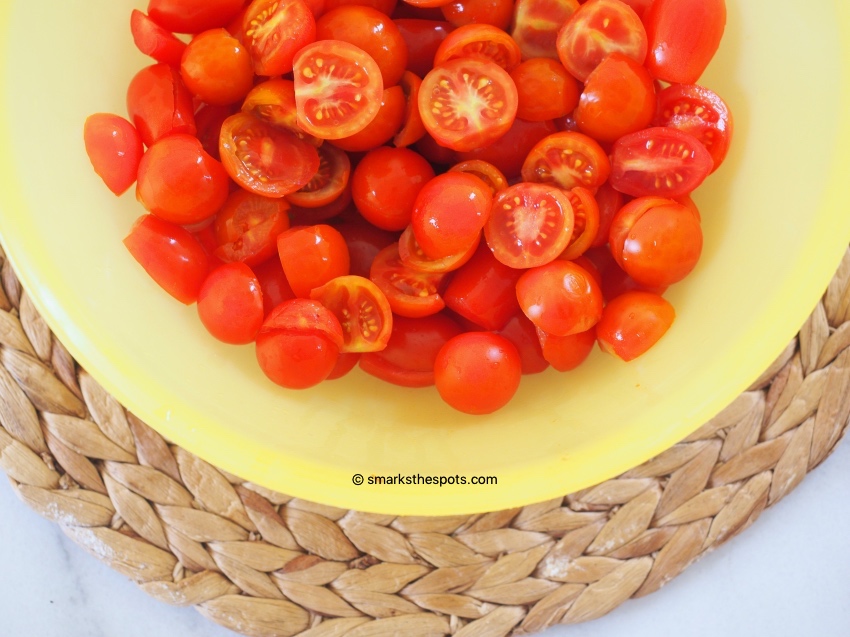 While I was in Athens a couple of weeks ago, my mother and I made a ladenia for lunch and it didn’t survive beyond a few hours. There are variations to this recipe and depending on your preferences you can twist it by adding your favourite toppings, like capers, peppers, mushrooms, artichokes, grilled courgettes and eggplants. I like to stick to the original version which is simplicity at its best. The secret is to use really good quality ingredients, so extra virgin olive oil and ripe tomatoes are a must. We used cherry tomatoes from our garden and homemade tomato paste this time which made all the difference. 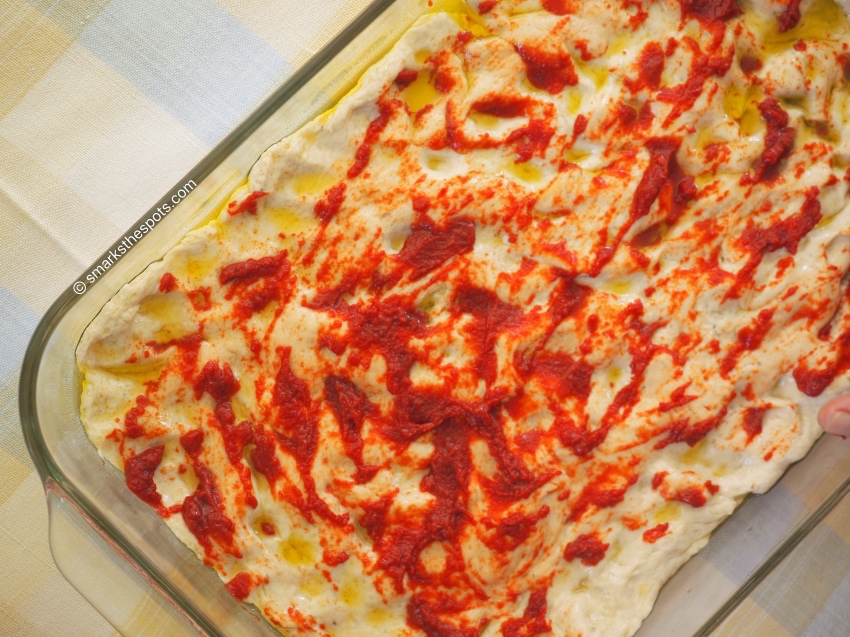 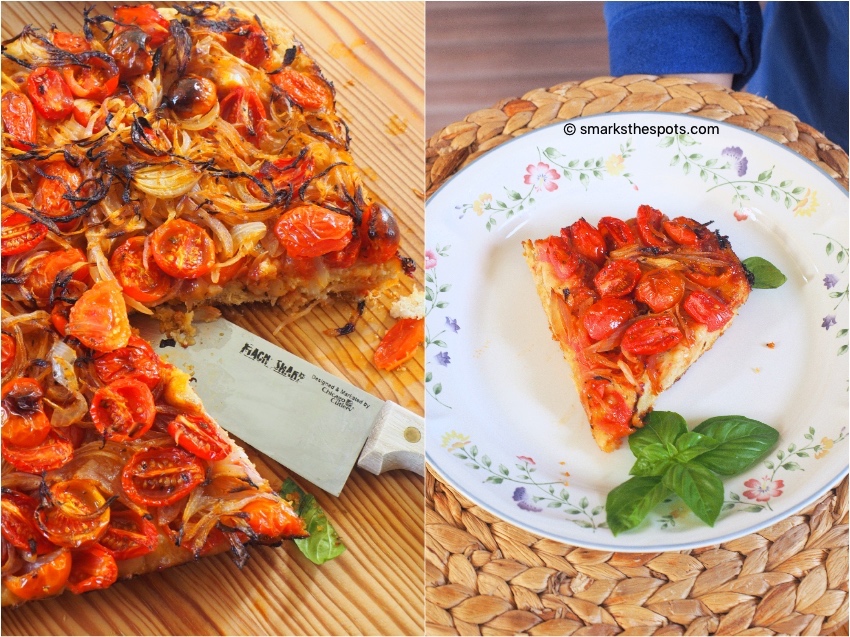 Add the yeast, sugar and the water in a large bowl and leave it aside for around 10 minutes in a warm spot until the yeast is activated. Add 250 gr flour and mix with a hand whisk. Then add the salt and the rest of the flour and knead with your hands until the mixture becomes thicker. The dough will be ready when it’s elastic and not sticky on the hands. If it’s too liquid, just add a little flour.

Put 70 gr olive oil in a baking pan and spread the dough well with your hands. Then cover it with a damp kitchen towel and leave it in a warm spot for about an hour until it doubles in volume. Cut the tomatoes and the onions, mix them in a bowl with salt, pepper and sprinkle them with olive oil. Spread the mixture over the dough.

Preheat your oven to 180 degrees Celsius set to fan. Bake in the oven for about an hour until the dough is well baked. Once it’s ready, remove from the oven and leave it to cool for 10 minutes before you serve. 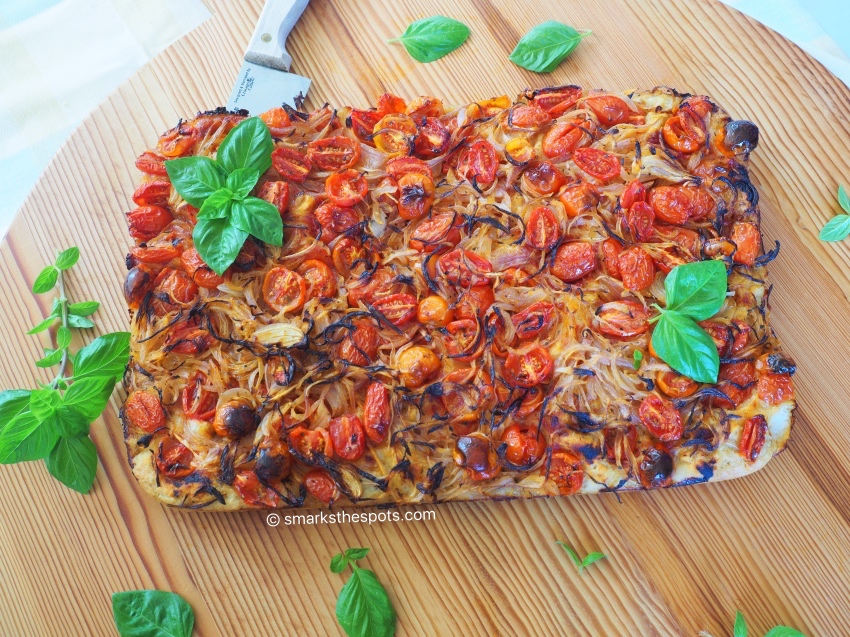