Having afternoon tea can be found in most London bucket lists and with good reason. Sketch in Mayfair is one of the most well-known establishments in the city as it’s home to lots of different dining rooms and bars. Having previously been here for lunch and cocktails, I was very curious (and excited!) to try their afternoon tea and celebrate a very happy occasion with my partner in crime.

The interior of the David Shrigley Gallery where afternoon tea is served is a feast for the eyes and a spot you must have seen at least once on Instagram! The room is an explosion of pink (in a good way) with all sorts of beautiful and sassy details: scalloped velvet seating, cheeky artwork lined on the walls, copper fittings and ceramic crockery featuring Shrigley’s drawings. Did I mention the live music? It’s really pretty indeed and for those who fancy a glimpse, there’s a little video on my Instagram stories!

The service unfortunately was far less impressive than the surroundings. My partner in crime and I decided to go for the standard Afternoon Tea (£58 pp) and skipped the Champagne/Alcohol-Free Bubbly Afternoon Tea options. The Tea Master (i.e. the person who is supposed to help pick your tea and make suggestions) and his tea trolley never made their way to our table, so after waiting for a while we just went ahead and chose what sounded good. Long story short, we ended up with a tea we didn’t really like as we never got the chance to smell the samples or get any advice.

Shortly after we placed our order, the first course arrived. Afternoon tea at Sketch starts with caviar that (according to their website) is served by the Caviar Man. Again, no sign of him. Maybe it was his day off?! At least the ”Egg and Soldiers” were delicious and well-presented – a spoon of rich, creamy Oscietra caviar accompanied by a 63° yolk in a Comté cheese mornay and thin Comté fingers. Next we were presented with a show–stopping cake stand packed with finger sandwiches, little cakes, pastries and sweets. Everything was really pretty and although we appreciated the creativity and did like a few (the corn-fed coronation chicken sandwich and the petit choux with raspberry cream were our favourites), the rest were a bit blunt in terms of flavour. We didn’t get to try the knotted Malabar marshmallows or the blueberry cheesecake, so we asked the waiter if he could pack them up for us to take home only to find out later that night that the cheesecake never made it into the cute pink bag they prepared.

We were encouraged to ask for extras of anything but decided not to be naughty and leave room for the scones. Warm, fluffy and much larger than your average scone, they were perfect. I particularly liked the plain ones paired with cream and French fig jam which I found more special than the traditional strawberry. The final round was a slice of cake for each from the trolley – Victoria sponge and pistachio cherry cake. You may remember how much I love cherries (and pistachios btw!), so the latter sounded right up my alley but sadly, was too dry. I did like the Victoria sponge though so at least we finished on a high note and positively full.

Now no review of Sketch would be complete without a mention to the toilets, the oddest you’ve probably ever seen! Space-like egg shaped white capsules each with their own music or commentary and multi-coloured ceiling tiles; they are quirky and out there.

As you’ve probably guessed, I left Sketch with mixed feelings about their afternoon tea. Sure, the space is beautiful but the whole experience didn’t feel like a treat as afternoon tea should, mainly due to the service which had it been better, it could have probably made up for the food. Maybe not my cup of tea (no pun intended!), so next time I’ll just stick to cocktails. 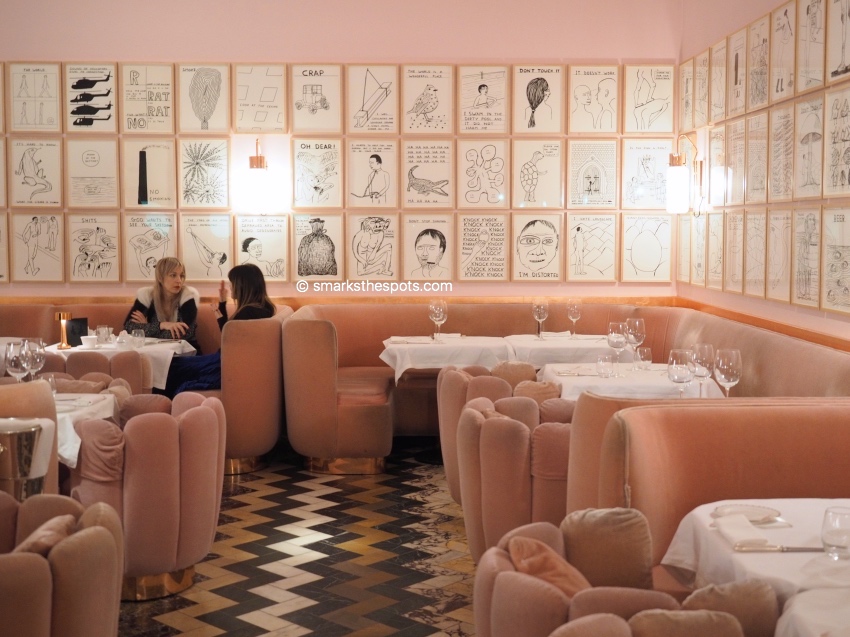 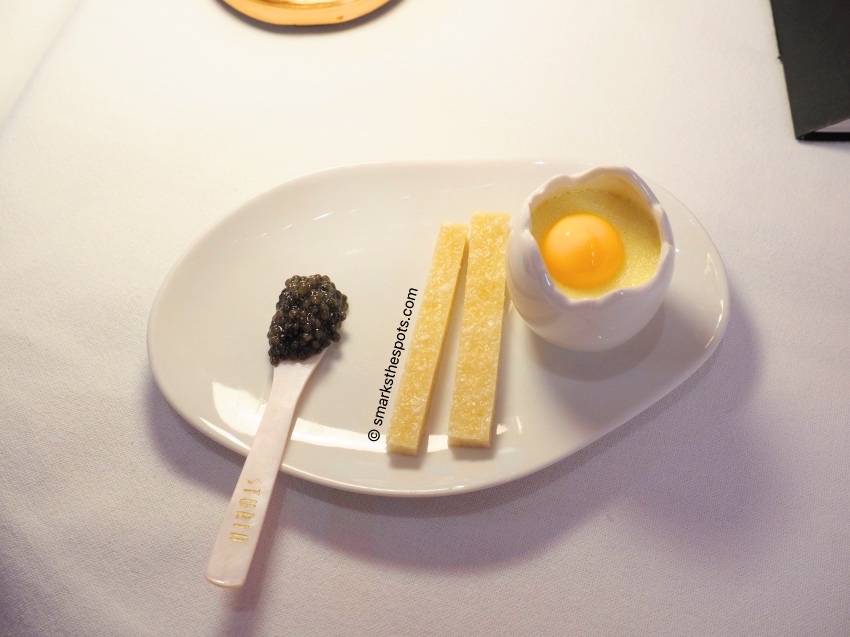 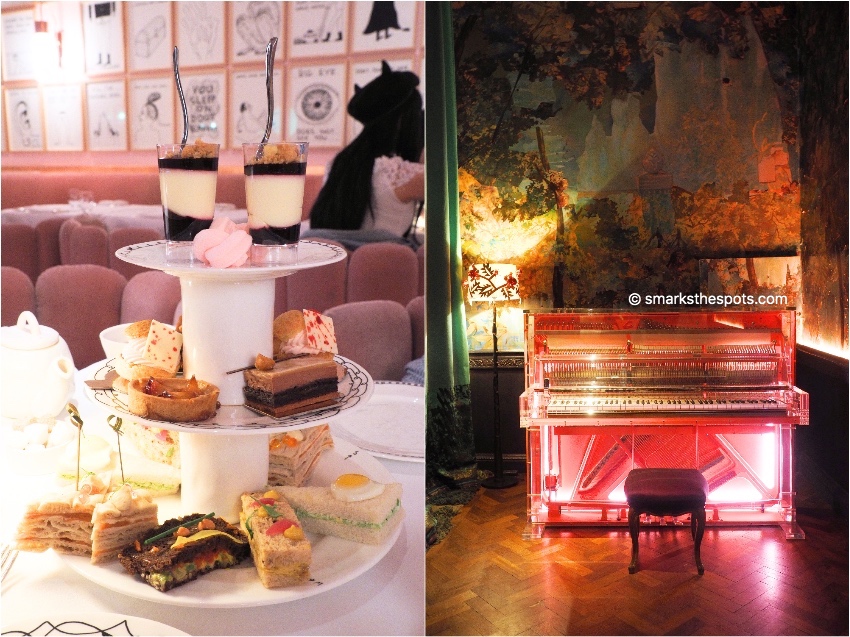 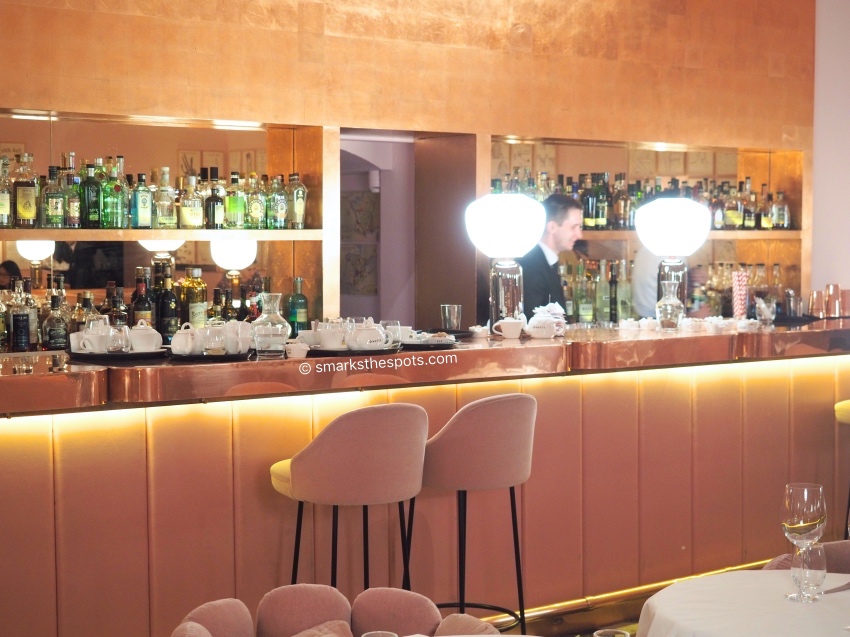 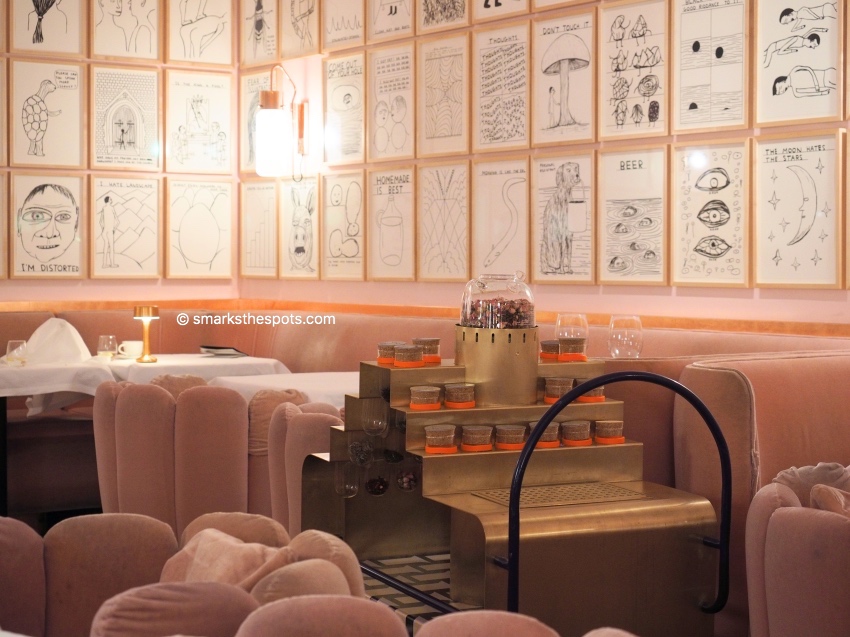 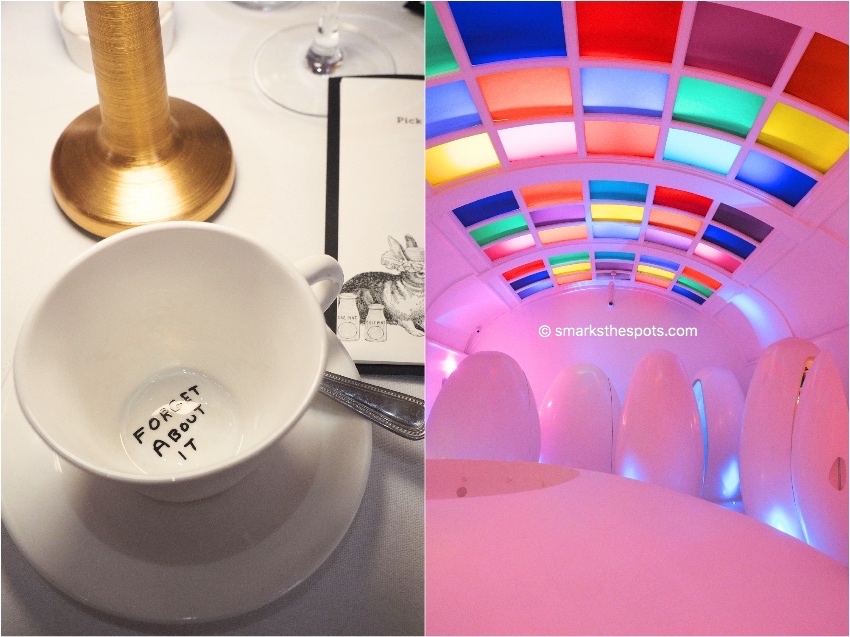 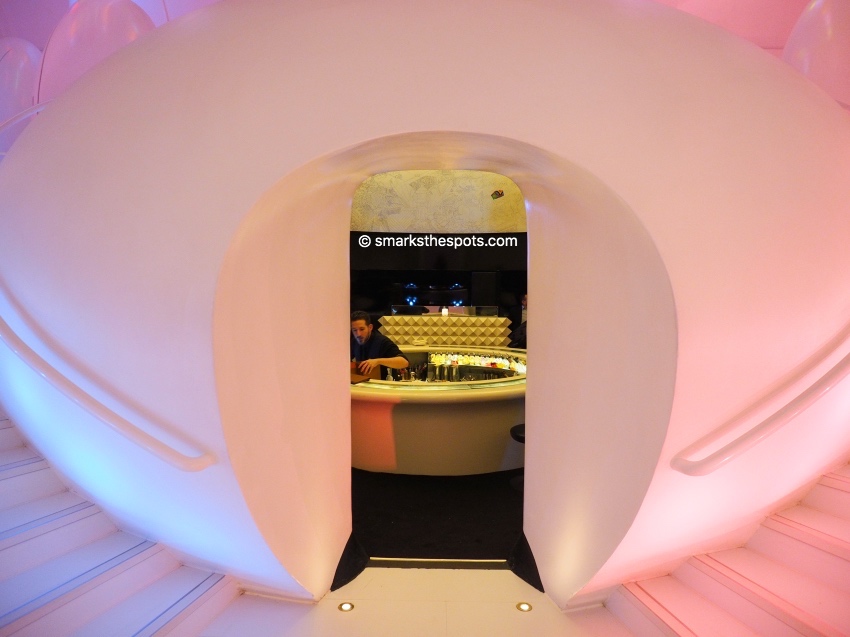 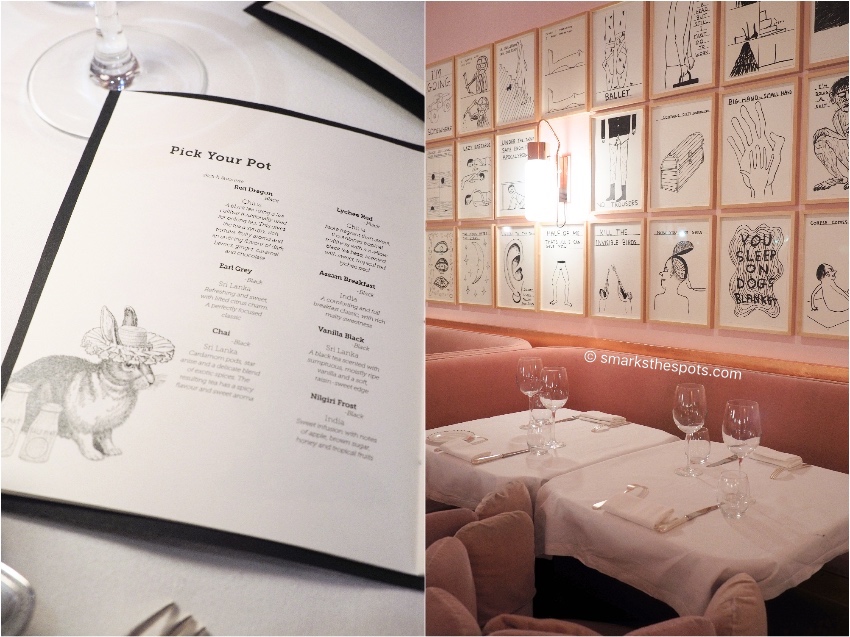 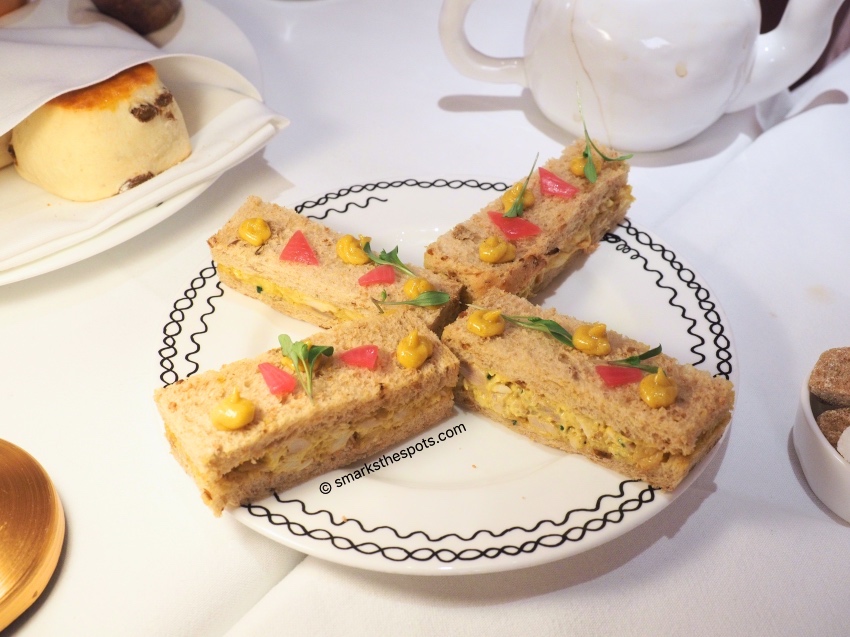 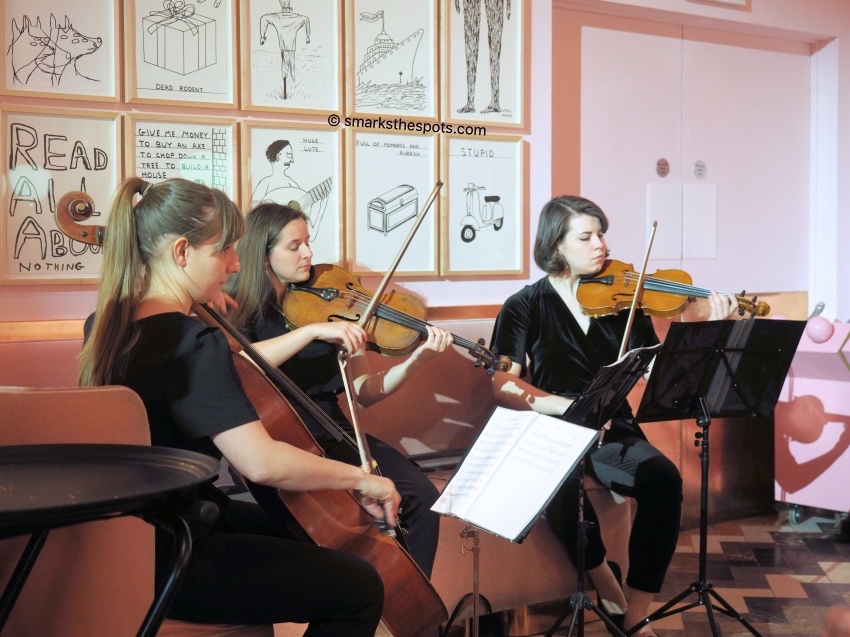 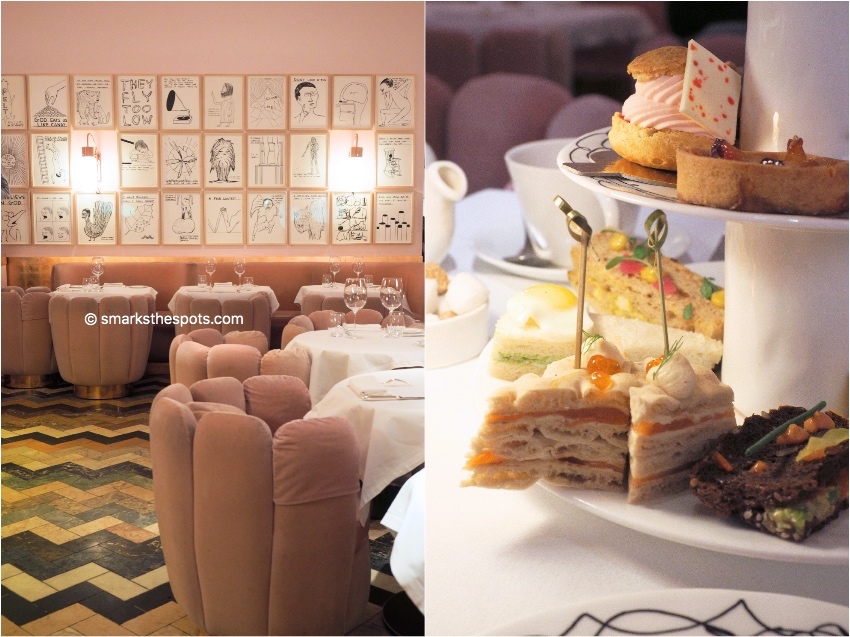 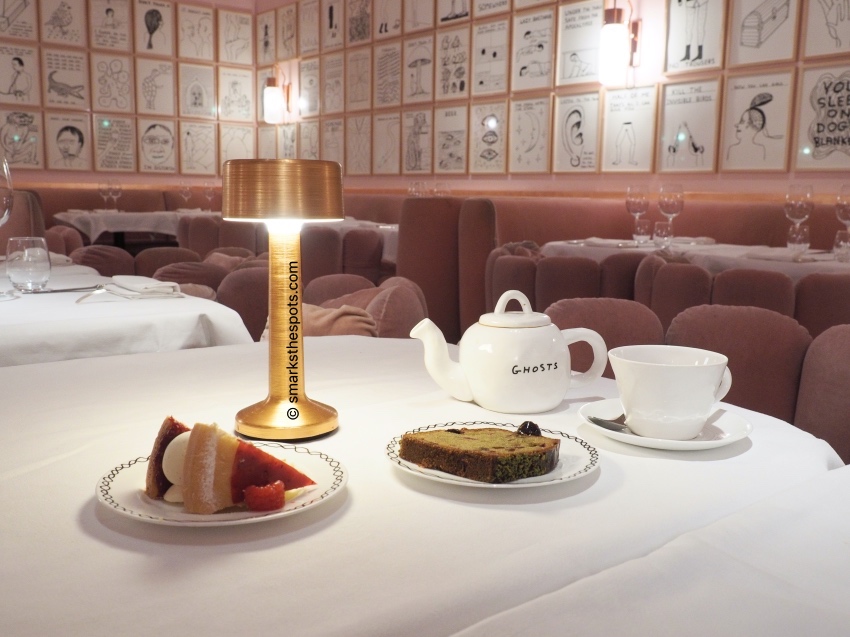 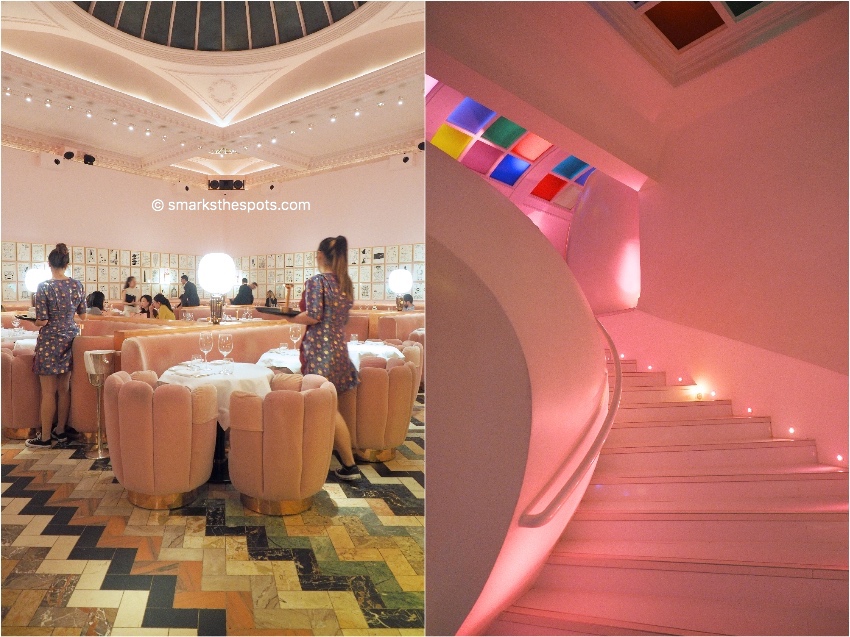 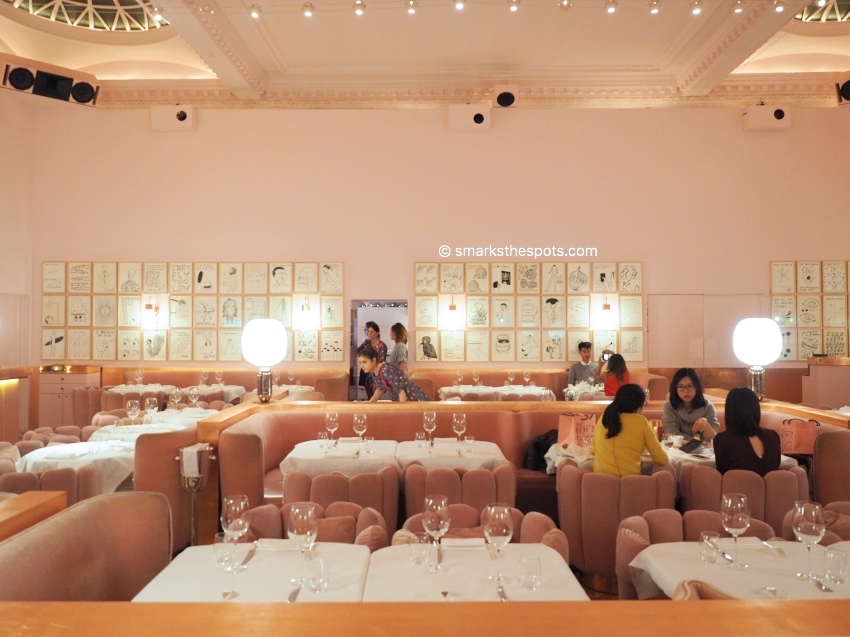